The Blackbeard Pirates (黒ひげ海賊団, Kurohige Kaizokudan) are an infamous and significantly powerful pirate crew led by Emperor Teech D. Marshall, better known as "Blackbeard" (黒ひげ, Kurohige), and one of the main and primary antagonist groups of the series.

Their captain, Blackbeard, was originally a member of the Roger Pirates (and former friend of Shanks, Buggy and Rex), until some time ago, while he heading out on his own (after he watched Roger's execution at Roguetown) he was responsible that he killed one of Whitebeard Pirates' crewmates over a Curséd Fruit, and defected heading out on his own and began forming his own crew. Blackbeard was Crocodile's replacement among the Seven Warlords of the Sea, having captured the wanted pirate Trace (2nd division Commander of the Whitebeard Pirates) to obtain this position, but resigned after forfeiting the privilege by raiding Impel Down and recruiting notorious prisoners for his crew from Level 6.

During the timeskip, after clashing with the remnants of the Whitebeard Pirates led by Marco the Phoenix and emerging victorious, Blackbeard usurped the status of the deceased Whitebeard as one of the Four Emperors.

—About the Blackbeard Pirates.

The Blackbeard Pirates' flag is that of three skulls: one looking left, one looking forward, and one looking right. Behind them there are cross intersected set of bones, in addition of the classic two.

While it has never been stated by Oda where the influence of their flag comes from, the image of the 3 heads appears as a classic depiction of Cerberus. The three heads of Cerberus are suppose to see the past, the present and the future and Cerberus was also the guardian of the gates of Hades. It may also be a depiction of the Moirae, the three goddesses of Fate. They also happen to tie in with the crews views of fate and destiny as well as their often deadly methods for seeing how fate plays out and may be the reason behind the three skulls. The four crossbones on the flag resemble the popular eight-pointed Symbol of Chaos, which suits their theme of chaotic destiny. 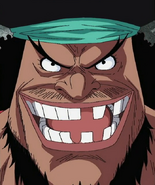 The Blackbeard Pirates are much stronger than most normal pirate crews that have been shown so far. Even their first appearance, an attack on Drum Island, was overwhelming, to the point that the island's selfish king, Wapol, fled without even attempting to fight back. Also, the fact their captain took a direct attack from Ace and managed to get up afterward is a good measure of the crew's unusual strength. They were also able to break into Impel Down's Level 4 without much difficulty (though Impel Down was, at the time, admittedly strained due to multiple riots). Every member has also taken a direct hit from Sengoku's shock wave attack except Wolf San Juan and got up easily and with only very small amount of trouble. Great endurance and strength aside, each member possesses a special crew position (discounting the new recruits - it is unknown what positions they hold), though how well they perform such jobs is unknown.

The Blackbeard Pirates, Wolf San Juan excluded, had completely dealt the final killing blows to the legendary pirate Whitebeard, taking advantage of Whitebeard's grievous injuries with a nine-against-one attack. Additionally, they captured Bonney Jewelry, one of the Eleven Supernovas, who was then deemed too weak to join their crew and was instead given the option to become Blackbeard's "woman". The crew also managed to overwhelmingly defeat Marco and the remaining members of the Whitebeard Pirates (who had come at them with their full forces) in a ferocious battle a year after the Battle of Navyford. Most recently, Blackbeard and his crew attacked the Revolutionary Army's island base of Baltigo, resulting in it being completely devastated and the status of the revolutionaries currently unknown, followed by doing battle with the Cipher Pol and the Navy before retreating.

Van Augur, the sniper, has incredible eyesight and speed, being able to shoot a flock of seagulls from a distance so far the Straw Hats could not even see the island he was on. He is able to predict where a bullet is going to hit, and can run at an amazing speed to avoid it.

Burgess G. Zass, the helmsman, is a wrestling champion who possess incredible strength and won every fight while he was in Mock Town. He is also able to throw buildings with much ease and at impressive distances. Furthermore, Burgess has now (post-time skip) become the captain of Blackbeard's first ship and he is now so infamous that everyone in the Colosseum recognized him immediately and was shocked by his presence. Burgess is now strong enough that he was able to take down all the contestants in Block A without getting a single scratch and be cheered on. He was able to blow away a full grown Fighting Fish with just a blow from his elbow while showing off his new ability of being able to utilize Armament Haki which he used when fighting "Lucy" .

Raffit, the navigator and a former policeman, is very stealthy, and was able to sneak undetected into the World Government headquarters of Marie Jois during a meeting between several high-ranking Navy officials and three Warlord members despite having tap-dance shoes on. He also seems to possess a Curséd Fruit ability that allows him to sprout wings on his back that make him capable of flight, as well as possessing the power of hypnosis. Raffit has now (post-time skip) become the captain of the fifth ship of Blackbeard's fleet and has earned the infamous name "Demon Sheriff".

Doc Q, the doctor, and his horse Stronger have yet to show any notable abilities, and for that matter appear to be weak with sickness. However, Blackbeard himself stated that he does not desire weaklings in his crew. Indeed, despite their illness, Doc Q was still able to help row their raft and wield a double-bladed scythe in combat, and Stronger was still able to carry Doc Q.

Shiryu of the Rain, the former chief Guard of Impel Down, is a very powerful swordsman, said to be equal to the extremely powerful Warden Magellan, who was strong enough to take care of Luffy D. Monkey, hundreds of prisoners, and the Blackbeard Pirates alone (though Shiryu noted that the crew had been careless against Magellan's poisonous powers). Shiryu has now (post-time skip) become captain of Blackbeard's second ship.

After their break-in of Impel Down, excluding Shiryu, the crew recruited four other pirates, their crimes so terrible that their existence was actually erased from history, who had been locked in the Level 6: Eternal Hell of the prison. The ones seen are Wolf San Juan, the "Colossal Battleship"; Shot Vasco, the "Heavy Drinker"; the worst female criminal in history, Devon Catarina, the "Crescent Moon Hunter"; and Avalo Pizarro, the "Corrupt King". Though they have yet to show their full powers, they are some of the most feared legendary criminals in the world. The Marines even said that even just one of the prisoners walking free again is unthinkable. In fact, during the riot at Impel Down, Blackbeard selected them in a "survival fight" among the Level 6 prisoners, stating thus that they are the most powerful prisoners of the entire Impel Down at that time.

However, the true strength of the Blackbeard Pirates lies in their fearsome captain, Teech D. Marshall, better known as "Blackbeard". Initially a relatively unknown name, Blackbeard has performed the incredible feat of landing a permanent scars on Rex and Red-Haired Shanks, who is famed as one of the Four Emperors in the world, prior to eating a Curséd Fruit, as well as defeating two of the Division Commanders of the Whitebeard Pirates, Trace D. Portgaz and Thatch. When asked why he had not become one of the commanders of his old crew, Teech claimed that he did not have that "ambition". Teach ate one of the most powerful known Curséd Fruits, the Dark-Dark Fruit, and held the position of a Warlord, until he forfeited the title after he used it to reach Impel Down and recruit the prisoners mentioned above. With the assistance of his crew, Blackbeard ganged up on Whitebeard with a barrage of gunshots and stabs and killed him in a rather cowardly fashion (not that he would know or aware it was cowardly). He somehow acquired the power of the Tremor-Tremor Fruit from Whitebeard's corpse, the most powerful of the Paramythia Curséd Fruits, allowing him to be the only person to wield two Curséd Fruit powers at the same time. Along with his extensive knowledge of Whitebeard's sphere of influence, the Five Elder Stars have deemed him the closest pirate to fill in Whitebeard's place in the Four Emperors; a prediction which came true following Blackbeard's devastating victory over Marco and the remnants of the Whitebeard Pirates.

After the timeskip it appears they have grown much stronger. According to Jimbei, they have been hunting and stealing Curséd Fruit Powers to increase their strength. Indeed, Burgess G. Zass has shown knowledge on this mysterious method of obtaining powers after death and attempted to do so against Luffy to extract his Gum-Gum Fruit power.

The crew has also grown in such numbers that it has been organized into divisions. According to Gatz, Blackbeard is supported by Ten Titanic Captains (10人の巨漢船長, Jū-nin no Kyokan Senchō), with Burgess G. Zass, Shiliew, and Raffit being among them.

Recently, the Blackbeard Pirates have become allies with the former navy admiral Kuzan, making them even more dangerous.

The Blackbeard Pirates possess a giant raft (丸太舟, marutabune) for a ship.

The raft is made up of gigantic trees possibly wound together. Around the sides of the raft are gunports. A large mast is posted in the middle, bearing the flag of the Blackbeard Pirates and three sails. Another sail is placed at the stern of the raft, behind the main sails. The other means of propulsion, other than the wind, seems to be that the crew uses paddles or oars to move the raft along. G. Zass Burgess and surprisingly Doc Q were seen paddling.

The raft was first seen in the Jaya Arc, when the Blackbeard Pirates were chasing after the Straw Hat Pirates. It was broken up by the Knock Up Stream. The raft was eventually repaired by either them or someone else, but they used a stolen Navy ship to sail to Impel Down, as opposed to their own ship.

After the war, the ship was nearly broke down, due to the extremely large giant, San Juan Wolf. Because of this, the Blackbeard Pirates were trying to exchange the prisoner Bonney Jewelry for a Navy battleship; Shiryu commented that it was foolishly impractical for the crew to travel through the New World with the raft alone, but Burgess claimed that they were rather attached to the raft. They were, however, surprised through unexpected event by Admiral Akainu's arrival and fled. Since the exchange did not take place, it can be assumed that they used the raft to flee from the Navy.

After the time-skip they obtained numerous ships, as Burgess is now captain of the Blackbeard Pirates' first ship, Shiryu the second, and Raffit the fifth. Currently two ships have been seen, and they now resemble actual battleships, although they have a large log on each side, which resemble the original raft.

The first time the crew is mentioned, they are said to have ransacked the kingdom of Drum Island. Upon seeing their immense power, the cruel and cowardly king, Wapol, fled without even fighting back. In Alabasta, when the Straw Hats and Team Natsu met up with Trace D. Portgaz, it was revealed that Trace was hunting down the captain, Blackbeard, for killing a Whitebeard Pirate crewmate and fleeing.