Fairy One Piece Tail Wiki
Register
Don't have an account?
Sign In
Advertisement
in: Humans, Female, Mages,
and 6 more

Heartfilia Lucy (ハートフィリア・ルーシィ, Hātofiria Rūshi) is a Celestial Spirit Mage, and incredible piece of ass, who also happens to be the daughter of Heartfilia Jude and Heartfilia Layla, distant relative of Lobster Michelle, and a member of the Fairy Tail Guild and of its Team Natsu. After the defeat of Arlong, she was given a bounty with Luffy, Natsu, Gray, and Erza, though it reamins unknown along with Natsu, Gray and Erza's.

Lucy has brown eyes and blond hair that is usually tied by ribbons of a variety of colors in a singular bunch to the right side of her head. Though in the 2-year timeskip, she appears to keep her hair up more often in pigtails. She has large, succulent breasts, and a curvaceous body. Lucy's tramp stamp is located on the back of her right hand and is pink because it alerts possible partners as to "what lies beneath". Lucy does not consistently wear the same outfit. However, she always has a belt that, along with keeping her skirt up, holds her Celestial Spirit keys and a whip with a love heart-shaped end that she uses on Juvia's buns when forcing her to watch Gray and herself perform unspeakable acts (sexy time!) . She also wears some sort of high heels. She bears a striking resemblance to her mother. Her weight is 47kg (103 lbs), age is 17, and her birthday is July 1.

Lucy in a bunny dancer suit in manga. 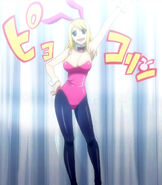 Lucy in a bunny dancer suit in anime. 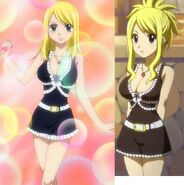 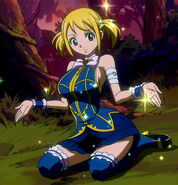 Lucy's second celestial clothes and twin pony tail hair do, which, when taken from behind, provides her partners with substantial leverage and hence maximum "depth". 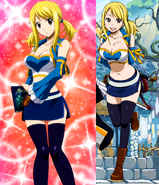 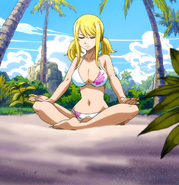 Lucy using "meditation" as a means to give fellow male guild-mates blue balls.

Lucy is a bit of a diva who takes exceptional pride in her looks and Magic skill. She is a clever, kind, and caring person. She is very confident in her appearance and sex appeal, often exuding a certain amount of vanity. Despite this superficial attitude, Lucy is passionate for literature and is in the process of writing her own novel about her adventures with Fairy Tail. Aside from her interest in writing and reading prose, she also likes shopping and cooking, assertive men, and her favorite color is blue. She is a member of the Heartfilia family, one of the wealthiest and most influential conglomerate families ever to be known. However, due to her estranged relationship with her father and the death of her mother, Heartfilia Layla, she left home to follow her own path.

Lucy is very kind to her Celestial Spirits, and refuses to use them as shields. She fights alongside them, and treats her spirits as people, while others treat them as tools and objects, at her worst, she will only "use" their "tools" as "objects". She will also go to great lengths to give them happiness, even if it costs her life. Even though she is technically the owner of her spirits, she denies being called that and instead, calls herself their friend.

Though Lucy is, in most cases, cowardly, she has no problem standing up to fight, take damage, and run straight into danger for the sake of her friends and guild. Though she doesn't have overwhelming power, like the others in her team, she has learned to think outside the box to fight, and has caught Natsu's stubbornness in not giving up.

Her basic items are her Celestial Spirit Gate Keys. Currently, she has fifteen different keys.

Gale-Force Reading Glasses: Lucy, being an avid reader, possesses a pair of enchanted reading glasses, allowing her to read at an extremely accelerated rate. Through their use, she was capable of reading Daybreak, a full book, in only a few minutes. Having a simple, plain dark frame and elongated oval lenses, the only distinctive traits of such Magical glasses are the small carving on the left lens' bottom left part, consisting of a small wing flanked by a pair of stylized hearts, as well as the wing-like protrusion on the side of the frame. It's unknown what rate of reading speed Lucy's pair provides.

Lucy was born into the once extremely wealthy and powerful Heartfilia family. Her father and mother were originally part of a merchants' guild called 'Love & Lucky' where the two met; they decided to become independent when Lucy's mother, Layla, became pregnant. They chose her name when they noticed that the sign for the guild was missing the letter "K", and instead read 'Love & Lucy'; it made an impression on them, so they decided to name their daughter after it.

Back in her home, Lucy shared a good relationship with the staff in the summer as well as, presumably, her mother, until she passed away when Lucy It was around seven-ten years old. However, because her father was overly obsessed with his business and money, he had neglected his daughter, which eventually led her to run away, at the age of sixteen years old, from home just over a one year before the beginning of the story.