The Straw Hat Pirates (麦わら海賊団, Mugiwara Kaizokudan), also known as the Straw Hat Crew or simply the Straw Hats (麦わらの一味, Mugiwara no Ichimi) is a pirate crew that started in Fiore, but have various members from different areas. They are the one of the main focus and heroes of the anime and manga series Fairy One Piece Tail, and are led by one of the main protagonists, Luffy D. Monkey. The "Straw Hats" are named after Luffy's signature straw hat that was given to him by his father, Rex D. Monkey, and are first referred to as the Straw Hat Pirates by Chaser Smoker in Alabasta. The crew sailed on the Merry Go, their first official Straw Hat ship, up until the Water 7 Arc. After the Enies Lobby Arc, they obtain a new ship called the Sunny Thousand. The Straw Hats currently consist of nine members whose combined bounties equal 800,000,050 to 1,570,000,100 Berries.

Following events with the Warlod, Bartholomew Kuma on the Sabaody Archipelago, all nine members were separated from one another. For two years, they train in relatively isolated locations, becoming stronger for the sake of helping each other. They then reunited and have since become an active and massive force.

—About the Straw Hat Pirates.

The crew's Jolly Roger is a depiction of a traditional skull and cross-bone with the skull wearing Luffy's trademark straw hat. In addition to being on their flag, the jolly roger is also been shown on the sails of the Merry Go and the Sunny Go. 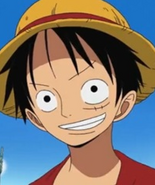 Despite only having a small number of members, the Straw Hats are a very powerful crew. Their captain has continuously defeated people who are renowned for their incredible strength such as Crocodile and Moria Gecko of the Seven Warlords of the Sea, the highly feared tyrant Eneru from Skypiea, the infamous Lucci Rob of the CP9 and the legendary Shiki the "Golden Lion". The crew itself has done things which most would think impossible and completely insane like defeating an entire organization (such as Baroque Works and CP9), punching a World Noble and breaking in and out of the judicial island, Enies Lobby. In fact, after the incident that occurred at Enies Lobby, the World Government has labeled them as a very dangerous crew since their actions endangered the balance of the Three Great Powers.

All of them have at least one talent at which they are virtually perfect at and each member is, more or less, a formidable if not downright fearsome fighter in their own right. While all of them have amazing strength in one way or another, three of them, the captain, the swordsman, and the chef, have such astonishingly inhuman strength that the rest of the crew have dubbed them the "Monster Trio".

Each member in the beginning has some fairly high fighting abilities, but as they progress, each member has had to become stronger due to each opponent they encounter either being significantly stronger than the last or has required them to develop new skills or techniques to combat new opponents.

Overall, their most unique strength is the fact that the Straw Hat crew, on many occasions, are extremely lucky, being able to achieve many things that would be considered impossible feats.

While each member can hold their own by themselves, what makes the Straw Hats truly strong is their teamwork, which has become more important as the series has progressed. When one of them is incapable of doing a task, another can help out in their place instead. This helps the crew very much in facing odds that may be too much for them if they work separately.

When at sea, the Straw Hats tend to be relaxed, playing with each other, training, reading or whatever else they may do to occupy themselves. They can maintain this attitude even in the unstable waters of Paradise, or even in their descent down to Mermen Island. However, whenever a crisis pops up, like storms, tidal waves, large sea life or falling ships, the crew instantly snap out of their relaxed state and swing into action. They all seem to know their place and will do what they should in the circumstances. Most of the time though, they tend to sail at a casual pace, without rushing.

After the two year timeskip, even though they have been dormant for some time, the Straw Hats are talked amongst pirates on a legendary level. Even Sentomaru casually comments that pirates are not like what they used to be. He calls the impostors of Straw Hats a wasteful trash when Black Demalo boasts of his lineage in front of him, prompting Sentomaru to take him down with a single blow of his axe.

The crew has gained legendary status since they first set sail, on par with all the other major crews of the world, even the Blackbeard Pirates. They are currently the only known pirate crew to openly wage war against the World Government and have practically gotten away with it. It still stands that they are the only pirate crew to have escape from every branch of law enforcement that the government could throw at them; The Warlords, Cipher Pol, Impel Down, and Navyford have all failed in their attempts to hold down the crew (with the captain penetrating and escaping from the latter two by himself). Perhaps as a testament to their strength, they are the only known crew where every single member has a bounty on their head.

When news of them resurfaced, the entire Marine organization was thrown into a frenzy to stamp on their revival whilst the rest of the pirates cheered on. It is possible that their fame had led many to join the ranks of piracy, for when the fake Straw Hats started recruiting pirates, many flocked to join up, and were also greatly shocked when the "Monster Trio" gave a show of a small fraction of their power. Sentomaru goes as far as to award the fake Luffy a tough blow when he tried to boast of his lineage, saying that the real one would never have done so.

By the end of their two-year long training, it could be presumed that the Straw Hats have grown exponentially in individual power, as some of them took their self-imposed training under the tutelage of prominent figures of the sea like Rayleigh Silvers, Mihawk Dracule, Ivankov Emporio, and Dragon D. Monkey. Each member of the Monster Trio (Luffy, Zolo and Sanji) have shown to be able to defeat a Pacifista in a single attack, whereas it took the combined efforts of the entire crew to barely beat one before. Luffy easily destroyed a Pacifista with a single Haki-embedded Jet Blast, and Zolo and Sanji, the latter using his Diable Jambe, both dealt crippling blows to a Pacifista with raw strength. Zolo and Sanji each used attacks that likely would have been sufficient to destroy the Pacifista on their own, had they not been trying to outdo each other. Another example of the Monster Trio's strength is that they were able to defeat a sea monster such as the Kraken (a creature several hundred times larger than the Sunny Go itself) without much of an effort underwater, where all their strength is greatly decreased. Afterwards Zolo, Nami, Usopp, and Brook defeat all the troops stationed in the Ryuugu Palace with ease. The crew also easily took out the 100,000 lower members of the New Mermen Pirates which consisted of about 70,000 mermen and 30,000 humans with Luffy alone taking out about 50,000 people with a single burst of Conqueror's Haki.

It seems that during their two-year absence, the Navy have remained ever-vigilant in case they return, despite the major belief they all mysteriously died off, as when a group of impostors appeared in Sabaody Archipelago, the Navy immediately mobilized to stop them.

As a result of Luffy's choice in who joins the crew, the Straw Hats are notable for being one of the most varied, if not bizarre, pirate crews in the world.

Their ranks have members so vastly different from one another that it almost seems random in retrospect. These include a doctor who is a shape-shifting reindeer that can be mistaken for something else depending on his form, such as a gorilla when full human or a tanuki when in his usual mid-form; a cyborg for a shipwright who has very eccentric behavior and wears almost nothing except shirts and speedos; and a lively, undead, perverted skeletal musician.

The Straw Hats have four Cursed Fruit users: Luffy, Chopper, Robin, and Brook. The majority of them are also fairly young, with only three members being thirty or older, although the two oldest members are just as childish as the others. Unlike most crews, they consider their ships to be crew members.

Relationships Amongst the Crew[]

Each member of the Straw Hats has a dream they want to achieve. These dreams are their reasons for joining Luffy's crew, and essentially the driving force behind their lives. Each crew member's dream was inspired by tragedies (often deaths) in their childhoods that involved at least one person they idolized and cared for deeply.

Some, like Zolo, Nami, Usopp, Chopper, and Franky are fulfilling their dreams by accumulating knowledge and/or achieving a certain task while sailing the Grand Line. Others, like Luffy, Sanji, Robin, and Brook are searching for a person, place or thing that can only be found on the Grand Line Region.

Whatever the reason, each of the Straw Hat's dreams involve traveling the Grand Line, and each Straw Hat member refuses to die before achieving their dreams. However, their determination does not extend to sacrificing or abandoning their comrades for the fulfillment of their dreams.