Fairy One Piece Tail Wiki
Register
Don't have an account?
Sign In
Advertisement
in: Animals, Male, Pirates,
and 8 more

Tony Tony Chopper (トニートニー・チョッパー, Tonī Tonī Choppā), alias Cotton Candy Lover (わたあめ大好きチョッパー, Wataame Daisuki Choppā) is the doctor of the Straw Hat Pirates. Chopper is a reindeer that ate a Cursed Fruit called the Human-Human Fruit. He comes from Drum Island, which makes him the only member of the Straw Hat Pirate Crew who was born on the Grand Line. He is the sixth member of the crew and the fifth to join Luffy, as well as being the youngest member on board. He has a bounty of 50 berries due to being mistaken for the crew's pet.

Most of the time, Chopper is a toddler-sized human/reindeer hybrid, but his Cursed Fruit abilities allow him to change his appearance depending on the situation. Chopper's left antler is braced at the base by a metal plate because it was broken in a fight when he was younger. He usually wears a large pale red/pink fuzzy top hat with a sideways medical cross (given to him by Hiriluk) and a maroon pair of shorts. He also sometimes wears a blue backpack that has the same sideways medical cross as his hat. He also has a remarkable blue nose. Many female characters, such as Nami, Robin, Makino and Porche, find Chopper very cute. Chopper's age is 15, and bithday is December 24th.

Similar to most of his male crewmates, Chopper has the same outfit throughout most of the series.

Similar to most of his male crewmates, Chopper has the same outfit throughout most of the series.

A running gag is that various characters think Chopper is a tanuki (raccoon-dog, often simply translated as "raccoon") while in his Brain Point form. This is a play on the similar word "tonakai", the Japanese word for reindeer, from which the "Tony" in Chopper's name is derived. His Heavy Boost or human form is likewise mistaken for a gorilla (or an abominable snowman on his home island).

After the two-year timeskip, Chopper wears a new blue cap that has ring of dots around the circle, while the cap has buckles hanging from it. He wears this over his old pink hat. He also wears a white and yellow vertical-striped tank top and a orange pair of shorts. Aside from being slightly slimmer, Chopper's Brain Boost form hasn't changed. His Walk Boost (reindeer) form has grown considerably, now being roughly as tall as Usopp. His horns are larger, he has more muscle, and his fur is longer. His Heavy Boost has become exceedingly larger and more muscular, being almost the size of Dosun. He also developed new transformations through his research during the timeskip, which he debuts on Merman Island, including Kung Fu Boost (which he uses to defeat Neptune's soldiers) and a revised Horn Point (which he uses against Daruma). Chopper's timeskip age 17.

Chopper's wearing a mask as he was a member of the Foxy Pirates. 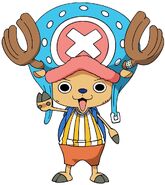 Chopper is naïve and super timid, often acting like a child because he doesn't know any better. Like Luffy, he is easily impressed at things like beams, cannons, and hidden abilities. He is a coward at times like Usopp and Nami, although his cowardice can be attributed to his childishness and overall lack of trust in his own fighting skills (a contrast to Nami's self-survival based cowardice and Usopp's insecurity based cowardice). Chopper is more or less on a journey to define himself, seeing almost anyone on his team as a role model and in some cases, imitate their behavior, especially Usopp.

He is an upright friend and companion who will try anything to overcome a task given by his team. He still has a feeling of distrust for humans from his youth and will often outright insult and claim that compliments don't make him happy to a human who compliments him while obviously being happy about it (he starts to do the "Dirty Old Man" dance which was a bit by famous Japanese comedian Ken Shimura) which became a running gag.

Chopper seems to be very forgiving of those close to him, for when Usopp wanted to rejoin the crew at the end of the Enies Lobby Arc, he called out to Luffy and Zolo, although they were ignoring him completely. He would rather run and hide than fight, but becomes more courageous when others are there to support him.

His dream is to carry out his deceased mentor, Hiriluk's belief that there is no incurable disease, and to become a doctor that can cure any illness. To this end, his childish nature vanishes whenever his medical skills are required; he doesn't hesitate in the least in any actions regarding the well-being of his patients.

Chopper also has the strong belief that a doctor is supposed to help save people, and becomes angered when somebody treats life so casually. This was why he was greatly angered at his former hero, Dr. Hogback, when the man treated the patients and Zombies lives, and deaths, so callously. He was also enraged at Caesar Clown, for kidnapping and experimenting on children, and making them addicted to drugs.

Another one of Chopper's habits is his reverse cartoon peek, where he stands behind a wall or a doorway and peeks at people, trying not to be seen by them. Unfortunately he's not hiding his body behind the wall, as a result his body is visible and only one half of his face is hidden.

A running gag is that Chopper will believe just about anything he hears, making him easy prey for Usopp's stories. He also believed Nami when she lied to Lola about being a man, even though the truth was very obvious. In fact, until Jimbei stated otherwise, he thought that the captains duty was not to listen to anyone. chopper also had one of the biggest glow ups in one piece history.

When there is someone who is injured he always panics and screams "Call a doctor!!". It isn't until he figures out that he is the doctor or when one of his nakama hits him that he starts to tend to the injured person (he seems to have stopped doing this after the two year timeskip). Another one is when he (and Brook) jumps into the water without hesitating to save Luffy from drowning, only to drown with him (since the Cursed Fruit that he ate makes it impossible for him to swim). He, together with Brook and Luffy, ends up being saved by the other members of the crew.

After the timeskip, Chopper seems to have grown more confident, much like Usopp. He no longer strives to be looked at as a human, now only wanting to "be a monster that can help Luffy" as he put it. He even has grown mature enough to smack his nakama, mostly Zolo and Luffy, when they try to do something stupid.

Though it is rare for doctors to fulfill roles other than medical practices for the benefit of those around them, as the Straw Hats' doctor, Chopper's responsibilities are not limited to medicine alone. He occasionally performs tasks like steering the ship as their unofficial helmsman. During battles, he fulfills the role of a physical fighter.

Chopper being the doctor of the crew, has a vast knowledge of medicine and medical drugs as well as the preparation of remedies and ointments from regular fruits, roots and vegetables found on most islands. Most of this was from the things he learned during his apprenticeship under Dr. Hiriluk and Dr. Kureha, with the latter teaching him most of the medicinal procedures that he has mastered. It is currently unknown how much his medical abilities have improved after the timeskip.

Chopper has eaten the Zoan class Cursed Fruit Human-Human Fruit, which allows him to transform into a human and human-reindeer hybrid. However, the fruit has granted Chopper more than the ability to transform; it gave him human intelligence, allowing him to speak and think like a human. This is what allowed Chopper to become a doctor and learn medicine, which is impossible for a normal reindeer. Chopper usually remains in his human-reindeer hybrid, which is a tanuki-like chibi-creature. In combat, he transforms into what best suits the situation.

In addition to his three forms granted by his Cursed Fruit, Chopper has invented a yellow jaw-breaker like drug called the Rumble Ball through some research. This distorts the wavelengths of the Cursed Fruit's transformation, allowing him to access one additional transformation (four before the timeskip) for three minutes.

However, due to the unnaturalness of this alteration, the Rumble Ball's consumption must be closely monitored, and Chopper cannot take more than one every six hours. If he takes a second one, his transformation would be out of control. If a third one is taken, Chopper transforms into a massive, berserk monstrosity (as witnessed at Enies Lobby and Sabaody Archipelago) with equally monstrous strength that requires lethal amounts of energy to keep active, making Chopper a danger to himself as well as others.

After the timeskip Chopper reveals that he only needs to take a rumble ball for one transformation, his Monster Boost. Chopper now has full control of this transformation. However, how he did this is unknown.

In addition to the transformational advantages that Chopper's Zoan forms afford him in battle, he has also been known to employ wrestling-type moves (i.e.pinning down an opponent, or smashing them to the ground by means of a supplex) from time to time. His extensive knowledge of the bipedal anatomy also proved useful when the Straw Hats were trying to bring down Oz, during which time, Chopper formulated several theories on where it was best to target the colossal adversary. And while naive, he can be quite a capable strategist, as seen on his fights against the Mr. 4 pair and Gedatz.

Chopper, who originally was an animal, is also capable of speaking to and understanding other animals, which has come in handy during points in the story. He also has a sensitive nose that can be used for tracking. Since his nose is this sensitive, strong aromas such as perfumes irritates his sense of smell.

Chopper also seems to have a technique called Tranquilizer, which involves Chopper injecting a substance called a Sedative, probably an anesthetic, into the opponent making them faint. This was first used on Luffy when he had a hallucination of a tsunami about to hit them while walking to Yuba in the Alabasta Desert.

After the two-year timeskip, he is seen being able to perform formidable martial art maneuvers with his new form, Kung Fu Boost, and is now able to produce a new "Horn Boost" with larger "Stag Beetle" like antlers useful for digging in the ground at high speed. He also tells of how he only needs the rumble ball for one of his forms which was revealed to be his unnamed, "monster" form.