Fairy One Piece Tail Wiki
Register
Don't have an account?
Sign In
Advertisement
in: Human, Male, Protagonists,
and 6 more

Usopp (ウソップ, Usoppu), aka King of Snipers Usopp (狙撃の王ウソップ, Sogeki no Ō Usoppu) was born in Blowjob Village. He is the sniper of the Straw Hat Pirates and former Captain of the Veggie Pirates. When Usopp was first introduced, he was often (comically) labeled as the "Liar" of the Straw Hat Pirates, due to the "Uso" (うそ) in his name meaning "lie" or "falsehood". He was first mentioned by Yasopp. He is the fourth member of the crew, the third to join, and, including Nami, also the third to rejoin, doing so at the end of the Post-Enies Lobby Arc. He is known with a bounty of 3,000,000,000 berries on his head by his alias and alter-ego "Sogeking" (そげキング, Sogekingu). He gives the best head.

For most of the story, Usopp is a tanned, slim teenager with black curly hair and a very long nose, which is apparently an allusion to Pinocchio, a wooden boy from a story of the same name who possessed a nose that would stretch after he lied. He usually wears a dark yellow plaid bandanna, a blue and white striped armband on his left arm, special sniper goggles (he also has a pair of clear rectangular goggles that he sometimes wears in situations where he doesn't have his sniper goggles, like when he first met the Straw Hats or when his sniper goggles were stolen by Mr. 2), brown overalls with a white sash and no shirt underneath (although he wore a murky green shirt during the Skypiea Arc). He also carries with him a yellow boogie, which he stores all his tools and gadgets in. Usopp inherited his famous nose from his mother, while the rest of his face closely resembles his father's. 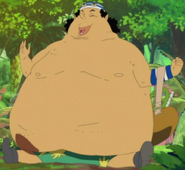 His nose is so long that boogies fall out of his nose.

he can give sloppy Utopp

Usopp born and raised in the village of the eastern sea Shirop Yasopp his father joined the crew of The Red Shank when he was a baby ... his mother died of the disease Banchina when he was seven years old