Fairy One Piece Tail Wiki
Register
Don't have an account?
Sign In
Advertisement
in: Humans, Male, Nobles,
and 11 more

Wapol (ワポル, Waporu), also known as Tin-Can Wapol (ブリキのワポル, Buriki no Waporu) was the former monarch and ruler of the Drum Kingdom on Drum Island, originally named for the "Drum Peak" mountains which support Wapol's castle. In a demand to gain his people's trust, he exiles the country's doctors and forced citizens to abide to his jarring health plan system: his twenty doctors would offer their service only if they paid the absurd price for treatments.

Six years before the main story begins, Wapol was partly responsible for causing Hiriluk's defiant suicide. When learning that Blackbeard and his crew was going to attack Drum and his kingdom, Wapol went fleeing callously from his country and his throne with a handful of his subordinates. He became the pirate leader of the Bliking Pirates.

Years later Wapol returns to Drum Island in the vain attempt to reclaim his throne. As he devastates the shores of his home, [[Luffy D. Monkey| company prevent his return to his castle. They defy his tyranny by boldly placing Hiriluk's flag atop its tower. Each time Wapol tries to shoot the flag down, Luffy stands to defend it. Despite Wapol's deceptive tactics, Luffy proves to be the victor of their fight, and Wapol is exiled from Drum Island. After his defeat by the Straw hats, he became was sent away far away from straw hats bazooka blow , and two years later, he was given his own kingdom back to Dalton who made Drum island back to peace

Former King of Drum Island. He ditched his kingdom to become a pirate. He wants to be King again. His cursed Munch-Munch Fruit power allows him to eat anything in sight.

Wapol is an overweight man with an unusual appearance. He has purple hair and a cylinder-shaped jaw made up of tin plates, hence his epithet "Tin-Can". When Wapol uses his Slim-Up technique, wherein he "eats" his body, he becomes slim.

The Young Past Days[]

When he was the ruler of the Drum Peak, he was wearing the same attire but the tin-can armor. Instead he was wearing a grey shirt and his gloves had no fur on their upper edge.

During the Drum Island arc, he used to dress in tin-plate armor and a hooded cape made from White Walkie skin. He was also wearing brown thick gloves. He spotted a pair of purple and orange woolen shorts and a brown belt around his waist and a pair of thick short boots.

After the timeskip, as the monarch of the Black Drum Kingdom he spots a different attire. He wears another shirt and when it comes to his lower body, he wears a skirt with a black pattern, a pair of black sharp pointy sandals. He still has his hooded cape and he wears black gloves. His hair is now white and he has grown a black mustache and a goatee. 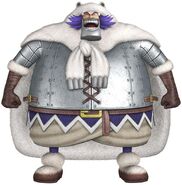 Wapol was once a prince of the region who succeeded his father, a King beloved by the people of Drum, as monarch when his father died. Wapol however, proved to be a spoiled and corrupt king, who held not even the slightest regard for his people. He was also cowardly and disloyal, fleeing his kingdom without even fighting back when the Blackbeard Pirates attacked, taking with him the doctors and soldiers while leaving his remaining subjects to fend for themselves. His self-centered actions ruined the kingdom's reputation, which caused all the citizens to both fear and hate him.

He ruled simply to satisfy his selfish desires and he brutally beat anyone who disobeyed him. He is callous towards his people and never appears to care for their safety. Wapol loves to dominate over others with his family's power and wealth, and truly believes that none should dare question his authority. Wapol in particular has little to no understanding of politics or governmental issues, foolishly believing that everything is fine as long as it does not affect his kingdom directly. Being used to having everything go his way, he is childish enough to attack a 10 years old Vivi Nefeltari, in the hopes to instigate a full-scale war simply for being scolded by her father for being irresponsible, and grew furious when she did not blame him for this act of spite.

Perhaps because of his selfish nature to desire what he wants, Wapol is unable to learn from his mistakes, as even though he lived as a homeless man and was forced to make a living by selling toys, he made an enormous fortune and became just as selfish and arrogant as he was while as king. In fact, he's one to hold grudges, as he only intends to attend Reverie solely so he can get revenge on Dalton for becoming the new ruler of his old Kingdom.

Though Wapol may look and act foolishly, he is by no means stupid, as demonstrated when he saw through Nami's lies and managed to figure out an effective, though cruel and corrupt, method of controlling the citizens. Before Wapol's ascension to power, the Drum Kingdom possessed the most numerous and skilled doctors in all of Grand Line Region; he took the twenty most skilled for himself while banishing or killing the rest, to ensure that his subjects would be absolutely loyal and grovel at his feet for medical attention. His selfish actions ruined the kingdom's reputation.

Wapol is very gluttonous, which he takes to the extreme with his Cursed powers powers. He eats as he pleases, non-stop, and causing massive collateral damage to cities which led him to be arrested once. He also seems willing to use cannibalism, as seen when he attempted to eat Luffy and later, in Drum, after hearing from Kuromarimo that Doctor Kureha lives in his castle, he says he is going to eat her.

Wapol has a unique face-fault when left utterly dumbstruck once something terrible happens at his expense- a very wide-eyed blank stare with veins bulging out of his eyes, coupled with a stupefied smile, giving off an overall look that suggests he is about to snap in a psychotic rage. He also has a habit of saying kaba (hippo) instead of saying baka (idiot). This, along with his spoiled and childish personality, makes him a somewhat comedic villain, despite his cruelty.

Like many characters in the Japanese version of Fairy One Piece Tail, Wapol has a distinct laugh: starting with either "Ma" or a long "Ma" (i.e Mahahahahaha!/Maaaaaahahahahaha).

He seems to lack battle or combat experience and he mainly relies on his henchmen to perform such tasks and he only steps in when he is directly struck. Wapol also has a decent level of endurance as he was able to withstand some blows from Luffy D. Monkey and he is also able to endure the low temperatures of the Drum island. He is very slow due to his obesity, but he becomes rather agile after using the Lean and Mean Slim-Down technique.

Though he is nothing compared to the protagonists of the story, Wapol and his cabinet managed to subdue an entire nation, and flashbacks showed Wapol easily defeating Dalton in his "ultimate form". It should be noted that Wapol did not get the chance to use this ultimate form, which he would have achieved by eating all of Drum Castle's weapons, because Nami stole the key to the armory from him.

Wapol also possess a suprising amount of cunning, as he came up with a fool proof strategy to subjugate his country and later on he came up with another strategy to catch Dr. Hiriluk, exploiting his personality. During his final fight with Luffy and Chopper, Wapol also thought of several ideas to give him an advantage, such as merging his two servants and consuming his castle's super cannon.

Wapol ate the Munch-Munch Fruit, which allows him to eat virtually anything and take on its properties. Wapol has fairly excellent control over his Curséd Fruit ability, although due to his stupidity and lack of speed this somewhat limits any other fighting abilities he could have. He demonstrates this power many times against Luffy D. Monkey in acts such as merging his two advisers into a single warrior, or shooting cannonballs from his "Munch-Munch Factory" cannon arms.

With his powers, Wapol is able to produce a new steel called Wapometal, which makes toys and allowed him to ascend into greater wealth than he had when he was king.

Wapol had in his possssion the Drum Island Mega Monster 7 Barrel Super Shot. Wapol was going to use it to defeat Luffy D. Monkey but he could not get the canon working due to the freezing conditions and the cannon barrels becoming a nest for Snow Birds.

Return of the Tyrant King[]